The Stephen R. Donaldson Universe Wiki
Register
Don't have an account?
Sign In
Advertisement
in: Utility templates, The Chronicles of Thomas Covenant, the Unbeliever, Lord Foul's Bane,
and 6 more

Lord Foul's Bane is the first book in The Chronicles of Thomas Covenant the Unbeliever trilogy written by Stephen R. Donaldson, and published by Holt, Rinehart and Winston Publishing on July 12, 1978. It's followed by The Illearth War, also published in 1978.

The novel tells the story of Thomas Covenant, a bitter outcast leper who is transported to the Land where the task of saving the world against Lord Foul is placed on his head. But Covenant refuses to believe any of it to be real, and takes the title of Unbeliever to hold on to his identity.

The novel was a critical and financial success, with critics praising the subversion of the classic fantasy tropes, the deep and mature themes and style.

He called himself Thomas Covenant the Unbeliever because he dared not believe in the strange alternate world in which he suddenly found himself.

Yet the Land tempted him. He had been sick; now he seemed better than ever before. Through no fault of his own, he had been outcast, unclean, a pariah. Now he was regarded as a reincarnation of the Land's greatest hero — Berek Halfhand — armed with the mystic power of White Gold. That power alone could protect the Lords of the Land from the ancient evil of Despiser, Lord Foul. Only...Covenant had no idea of how the power could be used!

Thus begins one of the most remarkable epic fantasies ever written...[1]

For Dr. James R. Donaldson, M.D.,
whose life expressed compassion and commitment
more eloquently than any words
and
To John Eccker
for years of help and friendship. 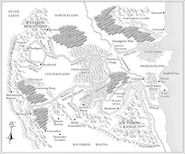 Map of The Land

Thomas Covenant is a young author whose world is turned upside-down when he is diagnosed with leprosy. After six months' treatment and counseling in a leprosarium, he returns home to find himself alone, divorced by his wife Joan, and outcast from his community. His son Roger has been taken to live with his ex-wife. On a rare trip into town, he is accosted by a beggar. The beggar refuses Covenant's offers of charity, including his white gold wedding band, makes several cryptic pronouncements, and leaves Covenant with the admonition to "be true." Disturbed by the encounter, Covenant stumbles into the path of an oncoming police car and is rendered unconscious.

He wakes to find himself in "the Land", a classic fantasy world. He first meets the evil Cavewight Drool Rockworm, who has summoned him to the Land with the power of the enchanted Staff of Law. Drool has been instructed and manipulated by a malevolent incorporeal being who calls himself "Lord Foul the Despiser". Foul reproaches Drool for his arrogance and transports Covenant to Foul's demesne. Addressing Covenant as "groveler", Foul taunts him with a prophecy that he (Foul) will destroy the Land within 49 years; however, if Drool isn't stopped, this doom will come to pass much sooner. He tells Covenant to deliver this message to the rulers of the Land, the Council of Lords at Revelstone, so that they can make preparations to combat Drool Rockworm and recover the Staff of Law.

Covenant is transported again and wakes on Kevin's Watch, a tall finger of rock attached to a mountain overlooking the Land's southernmost region. He meets a girl named Lena, who uses a special mud called hurtloam to heal the injuries from his fall. Covenant is shocked to discover that the hurtloam has also cured his leprosy. This is only the first example Covenant will see of the Earthpower: a rich source of healing energy present throughout the Land. Covenant's loss of two fingers on his right hand, a consequence of the failure to promptly diagnose his leprosy, causes him to be identified by Lena as the reincarnation of Berek Halfhand, an ancient Lord who saved the Land from Lord Foul during a war which occurred in the Land's distant past. His special identity is seemingly confirmed when Lena's mother Atiaran identifies Covenant's white gold ring – in his world a plain wedding band, which he had been emotionally unable to discard notwithstanding his divorce – as a token of great power in the Land.

Believing that he is unconscious from his collision with the police car, and therefore experiencing a fantastical dream or delusion, Covenant refuses to accept the reality of the Land. Appalled and indignant at the expectations the people of the Land have for him as their new-found savior, he gives himself the title of "Unbeliever."

He is also unprepared for the sudden restoration of his health, which cures the impotence brought on by his leprosy. This, and his mental turmoil over the reality he feels but does not believe, drives him into a frenzy, causing him to rape Lena, an act which will be pivotal to all that follows. When Lena's friends and family learn of what happened to her, they are barely able to comprehend the enormity of or reasons behind this crime, but the Oath of Peace to which they are sworn forbids them from taking vengeance.

Atiaran, with great chagrin, guides Covenant to the Hills of Andelain, a region of the land where the Earthpower is especially strong. There she entrusts Covenant to the care of Saltheart Foamfollower, one of the Unhomed Giants, who are allies of the people of the Land. The Giants, a seafaring people who live on the eastern coast of the Land, have a strong understanding of the Earthpower, especially as it relates to the Sea and other waters. Foamfollower is able to sail his stone boat up one of the great rivers of the Land to Revelstone, the Lords' mountain fortress.

Covenant delivers the message of Lord Foul to the Lords. He is invited into their council as an "ur-Lord" because of his connection to Berek, and his white gold ring, which the Lords recognize as having the power to unleash the "wild magic" which may be the key to defeating Lord Foul. Despite the obvious danger, the Lords decide to make an effort to wrest the powerful Staff of Law from Drool's evil grasp. Rather than waging an all-out war, the Council sends four Lords and a band of forty warriors to attempt to infiltrate Drool's lair at Mount Thunder.

Lord Foul's Bane was a critical and commercial success, and is now seen as one of the crowning achievements within the fantasy genre.

Fellow author, Steven Erikson who wrote the Malazan Book of Fallen series, praised Donaldson and listed him as one of his influences.[2]

In their review Fantasy Books Review gave the novel a 9.5 on a scale of 10, calling it a very complex work of fantasy, which is tough going but rewarding.[3]

Best Fantasy Books praised Donaldson in their very positive review for being able to explore the nature of being anathema while removing all blame from those who would despise the target. They go on to say that the entire book becomes an exploration of the interpersonal, psychological, and physical effects on a man become pariah.[4]

List of abbreviations • Paginations • How to reference an article

Community content is available under CC-BY-SA unless otherwise noted.
Advertisement