"Life without a tale is like a sea without salt."
—Saltheart to Thomas Covenant 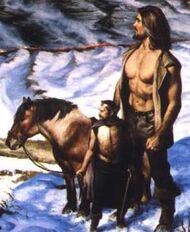 Saltheart Foamfollower is the Giant who transported Thomas Covenant in his boat on the Soulsease River from Andelain to Revelstone. He is legate of the Seareach giants to the Lords of Revelstone and is perhaps Thomas Covenant's closest friend in the Land.

Saltheart is twelve feet tall, has gnarled muscles, a short beard and eyes that are small, deep set and enthusiastic.

Role in the Covenant Series

Era of the Desolation

He was born aboard a Giantship during the time the Land was unpeopled due to Kevin Landwaster's Ritual of Desecration. His grand-parents were two of the first group of Giants that stepped onto the Land after their long sea voyages to sail the entire earth.

Along with Covenant, Foamfollower accompanied High Lord Prothall and Lord Mhoram on the quest to retrieve the Staff of Law from Drool Rockworm.

The Power That Preserves

Community content is available under CC-BY-SA unless otherwise noted.
Advertisement